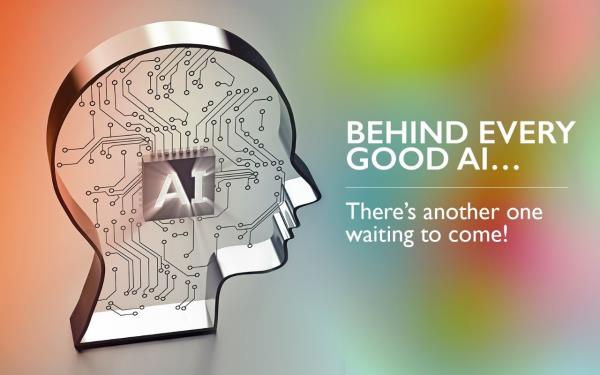 Behind Every Good AI

There’s another one waiting to come!

The Artificial Intelligence (AI) market by 2030 is predicted to be $15.7 trillion (PWC AI-Predictions Report 2018). By any measure, this figure is immense. It reflects the enormity of what AI could mean for global economies in the decade ahead.

The sheer might of AI will reshape companies and societies in general, and in many ways that reshaping has already begun. With the rise of automated assistants (Alexa, Siri, Google) natural language interaction and use of thin layers of artificial intelligence is common place in our daily lives. Automated systems in banking and finance, insurance and retail customer care are prevalent to reduce human repetition, boost productivity and focus human engagement on tasks of a higher value.

The cause célèbre of recent months has been autonomous systems. Automotive the area of focus causing disruption across markets, not least in the perception of the buyer public. The future of unmanned vehicles of any type used on land, sea or in air is one that is undoubtedly inextricably intertwined with the growing maturity of AI systems, and how far that envelope of deep intelligence can be stretched.

But first, let’s take a step back before we all lose ourselves in apocalyptic visions of a future run by machines.

For businesses today, AI is a minefield of misnomers. Every tech consultant is seeing money signs, and this situation isn’t helped by the fact that there is currently no law on what can be officially termed as AI. In the new gold rush, any intelligent algorithm worth its salt can be termed AI. It is therefore, important for any organisation to understand what AI means for them and how growth objectives can be placed around its implementation.

AI can be segmented into the following seven areas of intelligence focus:

The main consideration for any organisation looking to focus on one or more of the above areas of AI is securing the Value Proposition the can be borne out of this introduction. AI is an expensive business. Data has to be cleaned. Data architectures have to be built to enable transfer and transparency. As the old adage goes: ‘Rubbish in, rubbish out!’ If an organisation doesn’t get the foundation right, any investments made in AI will not produce the returns, nor the productivity level expected. Already there are countless failed AI initiatives, due to organisations believing that just by running a pre-programmed AI over their existing legacy systems, returns will flood in.

Despite its bumpy birth, there is no doubt that AI has grown exponentially over the past year with the likes of Deep Mind’s Alpha Zero, new versions of GANs (Generative Adversarial Networks), RCNs (Recursive Cortical Network) breaking CAPTCHA, Google’s 2nd generation of TPU chips (Tensor Processing Unit), but there is still some distance to travel as currently, AI is predominantly task and domain specific.

It is important when deciding where AI would produce the most value and secure ROI, to consider not just the current abilities of AI, but the direction in which AI is going. The art of the possible for AI is something that is narrowing in reality with each daily breakthrough.

AI is already redefining business models and value chains. 67% of executives say AI will help humans and machines work together to be stronger using both artificial and human intelligence (PWC Consumer Intelligence 2017). AI is helping business to uncover the value of big data and create new intelligent asset product lines. The relationship of a business to its suppliers and customers no longer has demarcation lines. Organisations employing deep learning platforms such as Amazon, Baidu and Alibaba are offering predictiveness to their customers, and all are building new value for companies within their value chains.

The existing preferences set up on these platforms continue to track, monitor and interpret behaviours to deliver more well-tuned offerings to customers. Multiple interaction points through social media platforms have enabled greater depth of understanding of buyer characteristics to preâ€‘empt needs, build new minimum viable propositions and create greater stickiness and customer loyalty. However, the big question of security and privacy constantly raises its head when the use of data becomes a way to control and manipulate, rather than market and enhance user experience.

Even more than technological supremacy, it is the aspect of trust that is the biggest obstacle AI has still to face and overcome, and perhaps one that will be addressed by transparency, accountability and legislation with all parties who have a clear value stake in ensuring AI reaches its full potential.